- October 27, 2013
This post is dedicate to all shoppers, seller and victim like me to warn you all about a guy who is out there to cheat people money and item. I know by posting this here I am taking up some risk and putting myself in danger, if I dare to post I am not afraid to face it. If you have the intend to cheat then you should be prepared to face the consequence. No one can be blame upon what has happen.

Even though I may look young and blur there is not a need to put me as your target because I am a easy target, regarding real life or in the cyber world this was not the first time I got cheated. Keeping quiet doesn't help, how about voicing it out? Is there use? I guess the answer is "NO". Why? Read on and you will find out.

I was a all-time-honest-seller, goods was always well receive into my buyer hands and full sum amount of money is always handed well to me. But this time I did not take safety precaution, all I can say is don't trust people too much especially strangers because you will never know what are they up to. People can say all kind of stuff to buy your trust and then break it with just one tiny move.

It all started in a mobile application called "Carousell", it is a market place that allows you to sell and buy unused/new item. I am not trying to promote anything here. You can easily create a account to shop and browse through a list of product that sellers post, selling an product there is quite easy and "safe" too all you need is an account, snap some photo, add in some description and list it up then users will be able to view them. What I think is safe about the website is that you can offer a price to the seller and then have a private chat within the seller and buyer on further negotiating or discussion without giving out your phone number. One day I decided try out the application to sell my Samsung Note 2 and that was how I got cheated from a guy using "Carousell".

Defendant claims that he is married with a children, he is currently in army and stayed at Sin Ming Road. On the day that we was dealing he also claims that it was his wife birthday. Can a guy in army possess a Pink IC? Why do he lie to me that he stay at Sin Ming Road when his IC stated Serangoon.

I have receive a tip off about this guy regarding his National Service. If he is serving NS he cannot get the Pink IC, the Pink IC will be return to him after ORD which is after 2 year of service unless he is going back for reservist. From what I heard, he is from Ang Mo Quee Camp 2SIR 2007 Mono-Intake Support Company(might not be accurate). So this prove that the information he gave me is a fake unless he went back for reservist! IF that is a fake it will be another plus point for him having the intention to cheat. His wife and children is real but I will not be posting photo of them because they are not involve in this.

On each picture, read conversation starting from the bottom. 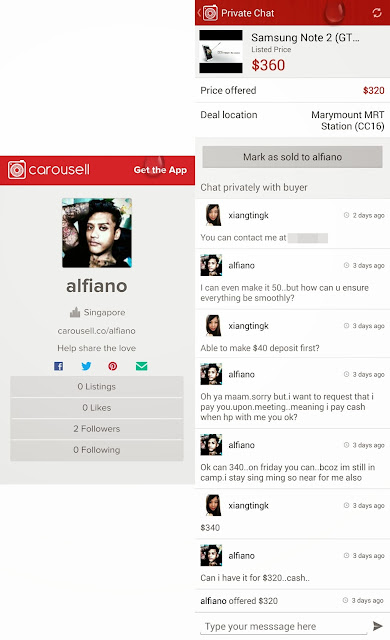 Below is the WhatsApp conversation after I gave him my number: 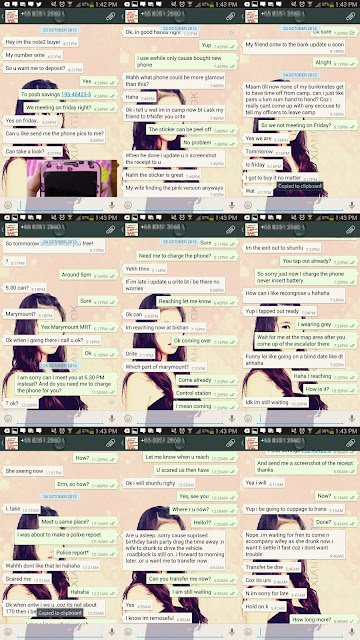 Don't you find anything fishy about this WhatsApp message? If he has a smart phone I am sure he have a iBanking account but why can't he transfer the money personally to me as a deposit so I rest assured that he confirm want the phone so I can reserve it for him.

On the 3rd picture by the left around 7:25 PM can clearly tell you that we have already met up. During meet up he was standing at a spot where is not visible to the camera when I said I want to meet him at the control station/Map area, the place he was standing is also just nice a smoking area. So maybe he can use smoking as an excuse if we want to stand somewhere else. This shows that he is up to something.

During Meet Up
I went to meet him together with my boyfriend. When I handed the Samsung Note 2 over to the defendant and I asked him to check through he did not but instead asked me to check it for him. I am like "He is the buyer and the phone suppose to be his and why is he not even checking it?" When I was setting up the phone for him during one of the procedure I ask him to key in his First and Last name because it was required, he felt reluctant  and he do not want to do it. During the transaction he keep calling his "wife" several time to ask about how to deal with me when we have already fixed the deal at $340.

Defendant tried to negotiation with me saying that today was his wife birthday and he actually wanted to buy the phone to surprise her. How can he call the wife and tell the wife that he has met me and gotten his hand on the phone when he want to give it to her as a surprise?! He told us that this was the 3rd time purchasing a Samsung Note 2, the previous 2 time he had receive a faulty phone so he need to check it thoroughly this time in-case he receive a faulty phone again. We can choose not to believe but instead we trusted him. He said that his wife wants to check the phone first so he wanted to give us a portion of the money and his IC first to bring back the phone to show his wife so we requested for $250 and he said was a bit too much so he asked for $140 and we think that it was too little so we ask for 50% of $340 which is $170 and we don't need his IC, just a photo of it will do.

After agreeing to the price of $170 to lend him the phone to bring home back to show his wife he said to be back by 12 midnight to tell me if he wants the phone a not because his wife ends her work at 10 PM. So he asked by 12 we will still be awake right? Is that a question trying to test us? If only we sleep then he can run away with the phone? At first he said that he will buy the phone no matter what, now he is considering. If he is taking the phone then we will pass him the box, charger and everything else then we will get the another $170, if he do not want the phone then we will return the $170 to him and we will get back the phone.

When he was leaving the place after getting the phone he asked me "What bus do I take to Bishan from here?" then I am thinking "Hello, the MRT is right infront of you and it only takes 2min to reach Bishan by train why the hell do he want to take a bus?" And I thought he say that he stay near "Sing Ming" I think it was a lie, if he stay nearby why will there will be typo, if he stay nearby he should be familiar with the transport around here.

As you can see from the screenshot of our WhatsApp conversation I texted him at 10:30 PM asking how is it and he said that he was still waiting for his wife. Until 12 Midnight I still did not receive a confirmation from him whether he wants the phone or not, we also tired calling him but the line did not get through. So we decided to make a trip to the police station to file a report and he said that we scared him?! Trying to buy our trust again is it?! From then until 4:52 AM then he reply my message, but too bad I am not afraid to say I have already made a police report regarding this matter.

I suspect that he has more than one hand phone. When dealing he was using a lousy Nokia phone, which I don't think it run with Android or IOS as "Carousell" is currently only available in App Store and Google Play. Now he has block me on WhatsApp, not replying to my SMS nor answering my call. You can call me stupid or dumb to believe him but as a human we at least need to have a basic trust to communicate AND not taking people for granted.

I have already file a police report regarding this incident and it was place under "Breach of Agreement", well the police can't do anything about it and I was refer to Small Case Tribunals. I have went to three different police center to report this case and all of them came out with the same conclusion, Small Case Tribunals. From the start he already have the intention to CHEAT but why isn't the police doing anything. The problem is not about the money, it is about the guy going around cheating people yet no one is going to do anything about it. Police will not investigate means that he may be out there to cheat other people and not getting caught? If that's so can I use the same method as what he used on me to other cheat people? Do you think that it is really worth to go to the Small Case Tribunals just to report this matter? In my opinion, NO. Do you think that there's any other legal way to deal with this? No. What can I do? Nothing, just blog.
You want free stuff? Sure thing! Make friend with me, if I am happy I might give it to you for FREE. There is no need to cheat me, I believe in justice and karma, if I cannot get you someone else will definitely do it. Watch your back.

Incident that no one wish to happen has already happen, other than putting the blame onto ourselves we should "Keep Serene and Carry On"

The problem is that everybody treats teenagers like they're stupid.
- Johnny Depp